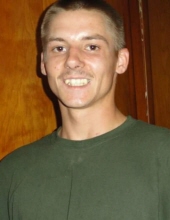 The obituary for Mr. Davis is being shared as a courtesy to the Whittington and Davis Family. It is with great sadness that the family of Tracy "Trae" Lemuel Davis Jr. announce that he entered into eternal rest Saturday December 28, 2019 in Indiana at the age of 29. Trae was born February 5, 1990 in Wilmington, NC to parents Tracy Davis and the late Michelle Bell Miller. After his parents divorce, Michelle went on to remarry Steve Miller who thought of Trae as his own. From an early age Trae loved the outdoors. He could usually be found playing sports, fishing, or playing his guitar. He was a plumber and craftsman by trade and took great pride in his work. He was a man of great faith and a member of Sonrise Baptist Church. In 2008 he moved to Indiana where he met Jasmine Littlepage and her daughter Hailey. Trae and Jasmine were married February 2009 and had 4 children together Lillyan, Isabella, Samuel, and Maddison. Though their marriage turned out to be less permanent than they expected, they both went on to love and raise exceptional children. His life may have been cut short, but he touched the hearts of many while he was with us. Those who knew Trae, even a little, lost a bright and shining light in their lives. Trae is remembered with love by his children Lillyan, Isabella, Samuel, Maddison, and Hailey, his dads Tracy Davis and wife Brooke of Georgia, and Steve Miller of Indiana, and his siblings James (Jay), Amber, Gabriel, Kaitlyn, Robert (Bobby), and Trevor. We know that Trae is in Heaven with his grandfather James Bell I, grandmother Jo Anna Shelly, grandmother Mary Lou Bell, and mother Michelle Bell Miller. Memorial Service to celebrate Traes life will be Saturday, January 11, 2019 at 2:00pm at Victory Baptist Church in Lilesville, NC. (Church st, Lilesville, NC 28091. Online condolences may be made at www.leavittfh.com
To order memorial trees or send flowers to the family in memory of Tracy lemuel Davis, Jr., please visit our flower store.
Send a Sympathy Card