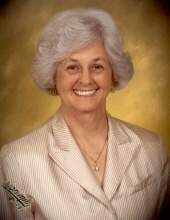 WADESBORO – On Wednesday, February 3, 2021, Mrs. Troyene Harrington Cowick, 83, peacefully went to be with her Lord and Savior. Funeral services will be 11:00am Saturday, February 6, 2021 at First Baptist Church, Wadesboro with Dr. Gene Hunsinger officiating. Interment will be private at Anson Memorial Park. Friends may pay their respects and sign a register at the funeral home on Friday, February 5, 2021 from 2:00pm until 6:00pm. Troyene was born September 7, 1937 in Anson County, NC and was a daughter of the late Claude Alexander Harrington and the late Vertis Estelle Alexander Harrington. She was a graduate of Wadesboro High School. For 20 years, she worked with the Probation and Parole offices in Anson County and later worked with the Developmental Evaluation Center, retiring from the state with 30 years of service. Following her retirement, she later worked as an Administrative Assistant for the Federal Probation Office in Rockingham. Troyene was a long-time and faithful member of First Baptist Church, Wadesboro. She was active in many areas of service and especially loved the Special Interest Sunday school class. In addition to her parents, she was preceded in death by her husband, Ellis Hart Cowick and her brothers, Harold Harrington, and George “Buck” Harrington. Those left to cherish her memory are her children, Danny Cowick of Marshville, Dwayne Cowick (Willie Mae) of Carnesville, GA, Doug Cowick (Pam) and Rhonda Sessions (Mike) both of Rockingham; her grandchildren, Christy Finley of Canton, GA, Jeremy Cowick (Darya) of Greenville, SC, Kacie Hamby (James) of Hamlet, Landon Cowick (Alyssa) of Rockingham and Matt Sessions (Hillary) of Laurinburg; her great-grandchildren, Colson, Coen, Camber, Freya, Malachi Kallie, Kendall, Hadley, Nora and Hart; her brother, Robbie Harrington (Debbie) of Lilesville and her nieces and nephews and their families. In lieu of flowers, memorials may be made to First Baptist Church, Sound System Fund, P.O. Bos 423, Wadesboro, NC 28170. The arrangements are in care of Leavitt Funeral Home and online condolences may be made at www.leavittfh.om
To order memorial trees or send flowers to the family in memory of Troyene Harrington Cowick, please visit our flower store.

This is a time for friends to drop by the funeral home to pay their respects and sign a guest register. The family will not be in attendance.

COVID 19 precautions - social distancing and wearing masks at all times.