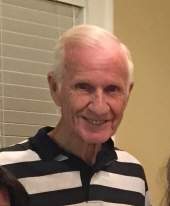 Wadesboro - Clarence William Brock died on July 2, 2019 after a courageous battle with cancer. He was a hard-working, devoted father, husband, and son with a family who adored him. After high school, he entered the US Navy and retired after 20 years of service, as a Chief Petty Officer. During his naval service, he lived in several countries and served two tours in the Vietnam War, two years and nine months in total. During his second tour of duty, he married the love of his life, Nam, and their children became his pride and joy. While in the Navy, he became an avid bowler and was a three-time state champion in the state of New Hampshire. Following the Navy, he worked for 3 years as a Correctional officer at the prison camp while attending Anson Technical College in Polkton. He ended his career with 26 years at the US Postal Service distribution center in Charlotte and became the primary caregiver of his mother, Sara Shaver, until her passing. He enjoyed playing golf and watching his beloved Duke Blue Devils play basketball in his retirement. He is survived by his wife, Nam, of Wadesboro, his son, Robert Brock of Virginia, his daughter, Sarah Brock of Charlotte, several nephews, a niece, and four grandchildren. Funeral services will be 11:00am Saturday, July 6, 2019 in the Chapel of Leavitt Funeral Home. Interment will follow in Anson Memorial Park with military honors. The family will greet friends from 10:00am until 11:00am Saturday at the funeral home prior to the service.
To order memorial trees or send flowers to the family in memory of USN Retired Clarence William Brock, please visit our flower store.