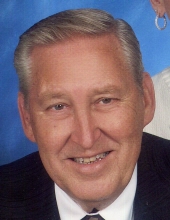 Lilesville- Mr. Vance Everett Gulledge, 76, died Saturday, March 6, 2021 at his home in Lilesville. Funeral services will be 2:00pm Tuesday, March 9, 2021 at Leavitt Funeral Home with Rev. Teddy Lawson officiating. Interment will follow in Lilesville Cemetery. The family will greet friends following the service at the cemetery. Vance was born July 8, 1944 in Anson County, NC a son of the late John William Gulledge and Beatrice Quick Gulledge. He had 30 years of service with Anson County Government, including Water Utility Director and finally retiring as County Manager. He was a life long member of Lilesville Baptist Church. Vance enjoyed horses, reading books, watching his western movies and spending time with family. Surviving are his wife of 54 years, Patsy Beachum Gulledge of the home; his daughter, Amy (Dickie) Dawkins of Lilesville; his grandchildren, Greg (Callie) Huneycutt of Pineshurst, Nicole Dawkins of Lilesville, Rick (Katie) Dawkins of Lilesville and April (Brandon) Surratt of Ansonville; and eight great-grandchildren. Also surviving are his sister-in-law, Nancy Gulledge of Lilesville; and brother-in-law, Cleveland Jordan of Wadesboro; his aunt, Charlotte Grant of Ellerbe. In addition to his parents, he was preceded in death by an infant daughter, Carrie Ann Gulledge; his brother and sisters, John William “Billy Gulledge, Betty Boling and Patsy Jordan. The arrangements are in care of Leavitt Funeral Home and online condolences may be made at www.leavittfh.com
To order memorial trees or send flowers to the family in memory of Vance Everett Gulledge, please visit our flower store.