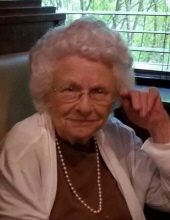 WADESBORO - On Friday, June 11, 2021, Mrs. Virginia Miller Bennett, 92, went to be with the Lord while at her home. Funeral services will be 1:00pm Tuesday, June 15, 2021 in the Chapel of Leavitt Funeral Home with Rev. Tim Knotts, her son-in-law, officiating. Interment will follow in Anson Memorial Park. The family will greet friends one hour prior to the service on Tuesday at the funeral home. Virginia was born October 10, 1928 in Waverly, GA and was a daughter of the late Jessie L. Miller and the late Stella Carter Miller. She was retired from West Knitting Mills and was a member of North Wadesboro Baptist Church. Surviving are her son, Kenny Bennett of Wadesboro and Austin Bennett of Peachland; her daughters, Mrs. Phyllis Hildreth of Wadesboro, Mrs. Sylvia (Tim) Knotts of Blacksburg, SC and Mrs. Nancy (Neal) Sikes of Wadesboro; 5 grandchildren and 11 great-grandchildren. In addition to her parents, she was preceded in death by her husband, Hiram K. Bennett, her great-granddaughter, Emmalyn Bennett and two sisters and one brother. In lieu of flowers, memorials may be made to North Wadesboro Baptist Church, 1211 N. Greene St., Wadesboro, NC 28170. The arrangements are in care of Leavitt Funeral Home and online condolences may be made at www.leavittfh.com
To order memorial trees or send flowers to the family in memory of Virginia Miller Bennett, please visit our flower store.