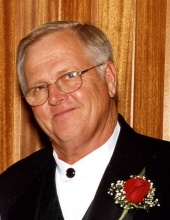 Peachland - Mr. Ward Horne 72, died Friday, March 22, 2019 at Atrium Health Union in Monroe. Funeral services will be 2:00pm Tuesday, March 26, 2019 in the Chapel of Leavitt Funeral Home. Interment with military honors will follow in Peachland Cemetery. The family will greet friends from 7:00pm until 8:30pm Monday, March 25, 2019 at the funeral home and other times at the home. Ward was born August 30, 1946 in Anson County, NC a son of the late Lester Kirby Horne and the late Lucille Cline Carpenter Horne. He was a graduate of Anson High School and received an Associates Degree in Business from Anson Technical College. He was a veteran of the United States Army, having served during the Vietnam War. He was a long-time farmer and later retired from United State Postal Service with 19 years of service as a rural mail carrier at Peachland Post Office. Ward really enjoyed horses and often participated in wagon trains and local parades. Surviving are his wife of 48 years, Martha Clontz Horne; his daughter and son-in-law, Lynn and Andy Burr of Peachland; his grandchildren, Maddie Burr and Brayden Burr both of Peachland; his aunts and uncles, Betsy Vanhoy, Emily Carpenter, Charles and Jeanette Carpenter and Lillian Carpenter all of Polkton and Carol Carpenter of Wadesboro and his sister-in-law, Doris Braswell of Marshville. In lieu of flowers, memorials may be made to the charity of the donor's choice. The arrangements are in care of Leavitt Funeral Home. Online condolences may be made at www.leavittfh.com
To order memorial trees or send flowers to the family in memory of Ward Horne, please visit our flower store.