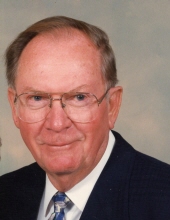 WADESBORO – Mr. William Carol Bias, a beloved husband, father, and pawpaw passed away peacefully at the McWhorter Hospice House in Monroe on Wednesday, February 17, 2021, at the age of 94. Bill was born August 15, 1926 in Alderson, WV, the son of the late Anna Mae and Cyrus Bias. He was married to his wonderful wife, Doris for 73 years. Bill enlisted in the United States Navy and was a gunner on the USS Topeka in World War II from July 1944 until June 1946. He received the American and Pacific Theater Ribbon, two stars and the Victory Medal. He met Doris Ann Mattox and nine months later they married. He graduated from the University of West Virginia with a pharmacy degree and he and Doris moved to Wadesboro where he worked for Doc Andes at Parsons Rexall Drug Store. Bill bought Parsons in 1960 and continued to work there until his retirement at age 60. Bill was an avid golfer and was known by his golf buddies as “The World’s Greatest Putter”. He loved to read, play bridge, poker and travel. He was a former member of Kilwinning Masonic Lodge and the Oasis Shrine and a founding member of Southview Academy in Wadesboro. He was a faithful member of First United Methodist Church, Wadesboro where he taught Sunday school. He was preceded in death by his beloved wife, Doris on February 4, 2021. He is survived by his daughters, Carol Jones and Becky Cockman (Kinsey) and his grandchildren, Courtney Renault, Lauren Jones, Rachel Cockman and Kinsey Cookman (Ashley). In addition to his parents and his wife, he was preceded in death by his brothers, Bobby and Charles and sister, Jerry Lee. The family is forever grateful for a group of outstanding caregivers who cared for Bill in his home, and for the wonderful nurses and staff at Hospice in Monroe. Bill will be remembered for his kindness, generosity and love for family and friends. Funeral services will be 3:00pm Sunday, February 21, 2021 in the Chapel of Leavitt Funeral Home with Rev. Dr. Sarah Kalish officiating. Entombment will follow in Anson Memorial Park. The family will greet friends during an informal visitation one hour prior to the service. In lieu of flowers, memorials may be made to Meals on Wheels of Anson County, c/o, Grace Senior Center, 199 NC-742, Wadesboro, NC 28170 or to the Alzheimer’s Association of North Carolina, 4600 Park Rd STE 250, Charlotte, NC 28209. The arrangements are in care of Leavitt Funeral Home and online condolences may be made at www.leavittfh.com
To order memorial trees or send flowers to the family in memory of William Carol Bias, please visit our flower store.
Send a Sympathy Card