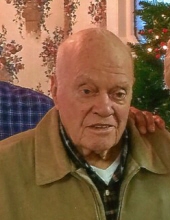 WADESBORO – On Tuesday Morning, June 30, 2020, a prayer was answered as Mr. William Wilson “Bill” Harrington, peacefully went to be with his Lord and Savior while being cared for in his home. Funeral services will be 11:00am Thursday July 2, 2020 in the Chapel of Leavitt Funeral Home with Rev. David Parrish, his nephew, officiating. Interment will be private in Anson Memorial Park. The family will greet friends following the service and other times the Harrington home. Bill was born April 18, 1930 in Anson County, NC and was a son of the late Charlie Wilson Harrington and the late Ollie Pearl Gathings Harrington. He was retired from Wade Manufacturing in Wadesboro with 45 years of service and was a member of Bethany Free Will Baptist Church. Surviving are his daughters, Esta (Craig) Stroud of Rockingham and Brenda Carpenter of Wadesboro; his grandchildren, Bryan (Stephanie) Tucker of Morven, Scott Tucker of Rockingham, Jeff (Love) Carpenter of Marshville and Lorie Schnierlein of Wadesboro; and his great-grandchildren, Jordan (Holly) Tucker, Peyton Tucker, Noah Tucker, Logan Tucker, Walker Carpenter, Hannah Harward, Jordan Schnierlein and Kendal Schnierlein. In addition to his parents, he was preceded in death by his wife of 68 years, Betty Parrish Harrington, and his sister, Myrtise Seawell. Bill will be remembered as a loving and devoted son, husband, father, and grandfather. He enjoyed spending time with his grandchildren, and they had a lot of fun together. He and Betty both loved the Lord and instilled in their children and their families the importance of having a church family. He was certainly a hard worker and excellent provider for his family. He will be greatly missed. The family suggests that in lieu of flowers, memorials be made to Anson Community Hospice, a Division of Richmond County Hospice, 1119 US-1, Rockingham, NC 28379. The arrangements are in care of Leavitt Funeral Home. Online condolences may be made at www.leavittfh.com
To order memorial trees or send flowers to the family in memory of William Wilson "Bill" Harrington, please visit our flower store.