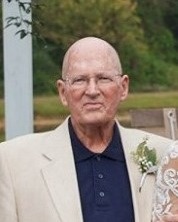 Funeral services will be 3:00 PM Saturday, September 24, 2022 in the Chapel of Leavitt Funeral Home with his son, Rev. Chris Jackson officiating. Interment will follow in Eastview Cemetery.

The family will greet friends one hour prior to the service Saturday at the funeral home and other times at his home.

Alan was born September 29, 1942, in Hickory, NC and was a son of the late William Clyde Jackson and the late Elizabeth Zaine Setzer Jackson. He was a graduate of Hickory High School in 1960.

He worked for several years with C.F. Sauer Company but was known most for being the owner and operator of East Wade Gulf in Wadesboro.

In addition to his parents, he was preceded in death by his wife, Gloria Gilbert Jackson, his children, David Alan Jackson and Carrie Rembisz and his grandson, Daniel Rembisz.

In lieu of flowers, memorials may be made to the Eastview Cemetery Trust, P.O Box 274, Wadesboro, NC 28170.

To order memorial trees or send flowers to the family in memory of William Alan Jackson, please visit our flower store.