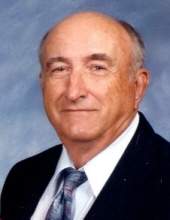 POLKTON - On Friday, June 11, 2021, Mr. William K. Pope, 90, went to be with his Lord while at home with his family caring for him. Funeral services will be 3:00pm Sunday, June 13, 2021 at Red Hill Baptist Church with Rev. Rodney Clements officiating. Interment will follow in the church cemetery. The family will greet friends one hour prior to the service Sunday at the church. William was born October 28, 1930 in Anson County, NC and was a son of the late Isaac Hunter Pope and the late J.V. Martin Pope. He was a graduate of Ansonville High School and was retired from the North Carolina Department of Corrections. He was also a farmer, raising hogs and cattle. A life-long member of Red Hill Baptist Church, he served as a deacon, Sunday school teacher and member of the brotherhood. Left to cherish his memory are his wife of nearly 70 years, Ruby Broadaway Pope; his children, Wayne Pope (Phyllis) of Polkton and Sylvia Pope Moore (Glenwood) of Salisbury; his grandchildren, Brandon Pope (Jessi) of Polkton, Lauren Kennedy (Adam) of Greensboro and Caitlin Grubb (Jason) of Salisbury; his great-grandchildren, Krist Bearden, Taylor Bearden, Sadie Grubb, Lydia Grubb, David Kennedy, Justin Lee, Katherine Lee and Wesley Lee and his nieces and nephews and their families. In addition to his parents, he was preceded in death by his granddaughter, April Suzette Moore and by his brothers and sisters, Henry Clay Pope, Rev. Isaac Pope, Jr., Mary Ramsey, Blanche Nash, Cossie May Bivens and Sara Pope. In lieu of flowers, memorials may be made to Red Hill Baptist Church Brotherhood, P.O. Box 207, Ansonville, NC 28007. The arrangements are in care of Leavitt Funeral Home and online condolences may be made at www.leavittfh.com
To order memorial trees or send flowers to the family in memory of William K. Pope, please visit our flower store.