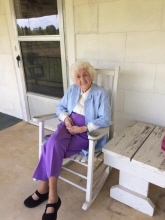 Mrs. Willie Faye Moore Tice, age 88, died Monday, January 6, 2020, at her home in Lilesville, NC. Celebration of Life services will be held at 4:00PM Wednesday at Leavitt Funeral Home with Rev. Donnie Helms officiating. Interment will follow at Anson Memorial Park. The family will greet friends at the funeral home prior to the service beginning at 3:00PM. Willie Faye was born April 23, 1931, in Chesterfield, SC, a daughter of the late Willie and Clara Griggs Moore. She was a longtime employee of the West Knitting Corp. which later became Reeves and then Dawson Mfg. She enjoyed gardening, canning, freezing and pickling her produce from the garden and then sharing with her family and friends. She was a dedicated member of North Wadesboro Baptist Church for most of her life. Survivors include her husband of 68 years, Billy Tice of the home; a daughter, Ellen Tice Goodwin (Lonnie) of Wadesboro; a son, Donald E. Tice (Sherry Ponds) of Lilesville; 6 grandchildren; and 7 great-grandchildren. In addition to her parents, Willie Faye was preceded in death by a son, Jerry Lynn Tice. Memorials may be made to N. Wadesboro Baptist Church, PO Box 1388, Wadesboro, NC 28170.
To order memorial trees or send flowers to the family in memory of Willie Faye Moore Tice, please visit our flower store.