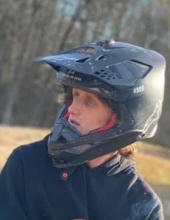 POLKTON – Mr. Zackary Taylor Osborne, 21, died Saturday, January 2, 2021 due to injuries sustained in an automobile accident. Funeral services will be 2:00pm Wednesday, January 6, 2021 in the Chapel of Leavitt Funeral Home with Rev. Luke Christy officiating. Interment will follow in Anson Memorial Park. There will be no visitation. Zackary was born October 24, 1999 in Mecklenburg County and was a son of Amy Marie Osborne and Donald Davis Burr, II. He was a member of Peachland United Methodist Church. He had worked with his grandfather and father in their family poultry farm and was an avid dirt bike rider. He has been riding dirt bikes since he was a small boy and riding, and racing was his favorite pastime. Those left to cherish his memory are his parents, Amy Osborne of Polkton and Davis Burr of Wadesboro; his brothers and sisters, Jaylin, Miracle, Chase, Ava and Mason; his grandparents, Donna Burr of Wadesboro and Eddie Osborne of Calabash; his great-grandmother, Ruth Mercer of Polkton; his uncle, Alston Osborne of Calabash and his girlfriend, Karrington Tupper of Wadesboro. He was preceded in death by his grandmother, Katherine Gail Osborne and his grandfather, Donald Davis Burr. In lieu of flowers, memorials may be made to Peachland United Methodist Church, Youth Ministry, P.O. Box 330, Peachland, NC 28133. The arrangements are in care of Leavitt Funeral Home. Online condolences may be made at www.leavittfh.com
To order memorial trees or send flowers to the family in memory of Zackary Taylor Osborne, please visit our flower store.

Due to the continued COVID-19 risk, the family respectfully requests everyone attending funeral services wear a face covering and practice social distancing as much as possible.